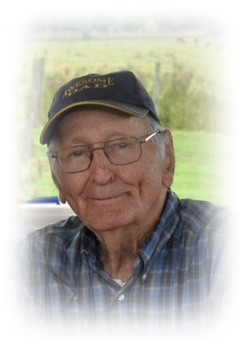 Lawrence K. Moran, of Arthurdale, died on September 23rd at Stonerise Kingwood – of old age, he would say; his daughter, Kathy was by his side. He was 103 + 5 months. Lawrence was born on Easter Sunday, April 20, 1919, the fifth of 13 children. His parents were Melvernie (Stuchell) and Bruce Moran, Sr. of Kanes Creek. His 12 siblings preceded him in death.

He grew up on a farm and he always loved farming. His two most formative experiences were being in the Depression-era Civilian Conservation Corps in his teen years and his time with the military police when he was in the Army Air Force during World War II. He often talked about those years.

In the CCC, he worked on projects in locations as far as California and as close as Cooper’s Rock and Camp Dawson. He was fortunate to serve his military years in the U.S., largely in Florida.

After his military service, he returned to Preston County and became a coal miner. After several years in mining, he was active in trying to unionize the miners. That failed and he was fired. He found work at the brass factory then in Reedsville. He later became a school janitor and bus driver at the Arthurdale schools. Students nicknamed him “Dimples.” When they saw him, it wasn’t, “Hello, Mr. Moran,” it was, “Hello Dimples.” He retired from the Preston County Board of Education.

The two things most important to Lawrence were his family and his farm. Sometimes we may have wondered in which order, but we realized that when he was out on the tractor, or underground digging coal, or behind a broom, it was always about the family.

In the mid-1940s, he bought a home in Arthurdale, where he lived for the rest of his life. He started his farm there, raising Aberdeen Angus cattle for many years. He spent summers plowing, planting, and haying. With his tractor and baler, he plowed gardens and mowed hay for people all over Arthurdale. Everyone knew him. He kept a small family garden well into his 90s.

He always said he’d had a good life and he once remarked that he didn’t know why people had been so good to him.

Friends may call at the Field Funeral Home in Masontown on Wednesday, October 5, 2022, from 2 – 4 & 6 - 8 pm. A funeral service will be held at the funeral home on Thursday, October 6, 2022, at 11am. To honor his wishes Lawrence will then be cremated. Military rites will be conducted by the Preston County Honor Guard and the WVANG Honor Guard.

Share Your Memory of
Lawrence
Upload Your Memory View All Memories
Be the first to upload a memory!
Share A Memory
Plant a Tree