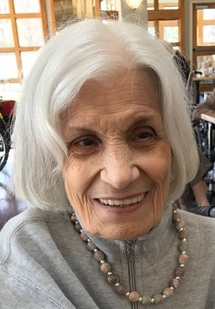 Obituary of Marie A. Burke

Marie Antoinette "Toni" Burke, 96, of Mayfield Heights, OH, formerly of Morgantown, WV, passed away Sunday July 23, 2017 at Rae-Ann Nursing Home in Westlake, OH. She was born in Morgantown, WV on September 2, 1920, a daughter of the late Sallie (Gregg) and Joseph Buda. Toni was a loving mother, grandmother and great grandmother. She graduated from Morgantown High School and continued to live in Morgantown until she moved to Mayfield Heights, OH in 1950. She worked at the Saks Fifth Avenue in Cleveland for many years. She is survived by two daughters, Linda Johnson and husband Bob, of WA and Judy Weingold and husband Mark, of Orange, OH; a son, James Perry and wife Diane, of Lorain, OH; 9 grandchildren and several great grandchildren. Toni was preceded in death by her husband, Robert A. Burke and two brothers, Russell Buda and Joseph Buda. Friends may call at the Field Funeral Home in Masontown on Thursday, July 27, 2017 from 4 to 7 p.m. with a scripture prayer service being held at 7 p.m. A Mass of Christian burial will be celebrated at the St. Zita Catholic Church in Masontown 11 am Friday, July 28, 2017 with Fr. Andrew Switzer, as celebrant. Interment will follow at the Masontown Cemetery. Condolences may be extended online to the family at www.fieldfuneralhome.com.

Share Your Memory of
Marie
Upload Your Memory View All Memories
Be the first to upload a memory!