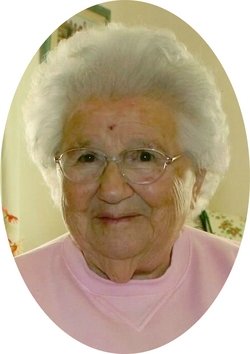 Josephine Marie Lawrence, 91, of Masontown passed away Wednesday, September 1, 2010 at Heartland of Preston County in Kingwood. She was born in Cascade, on October 31, 1918, a daughter of the late Frank and Lucia Cercone Sylvester. She was a loving wife, mother, and grandmother. She was a member of St. Zita Catholic Church Masontown, and had worked at Sterling Faucet in Mogantown for several years. She is survived by her daughter, Elizabeth Gamino and her husband Robert of Woodbridge, VA.; her son Sandy Lawrence Jr. and his wife Sue of San Jose, Ca.; a sister Edith Waterson of Niles, OH.; four grandchildren, and three great grandchildren. She was preceded in death by her husband, Sandy Lawrence Sr.; a sister, Italia Sylvester; three brothers, John Sylvester, Eglo Sylvester, and Emilio "Timber" Sylvester; and a grandson Mark Radabaugh. Friends may call at the Field Funeral Home in Masontown on Monday September 6, 2010 from 2-4 and 6 to 9. A scripture prayer service will be held at 7 p.m. A Mass of Christian Burial will be celebrated 10 a.m. September 7, 2010 at St. Zita Catholic Church in Masontown with Fr. Arthur Bufogle as celebrant. Interment will follow in the Masontown Cemetery Condolences may be extended to the family at www.fieldfuneralhome.com

Share Your Memory of
Josephine
Upload Your Memory View All Memories
Be the first to upload a memory!
Share A Memory
Plant a Tree